Make this Your Space

Let us listen to what our diverse artists, parents, siblings, creatives and co-advocates have to say about their experiences in the inclusive arts! Feel free to read, get inspired and share your voices!
​
​I remember how Eio ( his childhood name ) in kinder, would ask me to draw animals on scratch papers. I would gladly oblige to encourage him to ask for things and talk. But later on, he became more interested in clicking the camera of my cellphone rather than telling me to make stick figures on paper.

It took Reuel many years before he could confidently identify colors.  He would just keep on guessing their names until one day he had it all click together, thanks to his very talented and patient teacher Domini Robledo who home-schooled him in music and functional art. Now, he can identify colors that most don’t even know— cerulean, indigo, apricot, ochre, dandelion, mahogany...

I recall how I started to draw when my cousin, architect and movie actor Johnny Misa,  introduced this reticent 5 year old to his two artistic daughters, Yasmin and Edith, now both published artists and art teachers. They would while away dog-day afternoons doodling, sketching, and conjuring childish cartoons while I would be the “saling-pusa“ drawing my all-time favorite Mayon volcano during those hot summer days.  I would always go home a happy child.

In highschool, I often found myself doodling instead of writing down notes. In fact, when periodical exams came, I would borrow my brightest classmates’ notes because I had nothing written down, except forms and figures from my unconscious while listening to the droning lectures of teachers. Surprisingly, I would find my grades close to the highest in class because apparently, my doodlings were imprinting the lessons I thought I was mindlessly listening to at that time. Apparently I was a kinesthetic and auditory learner — by constantly doodling, I could listen better and concentrate more.
​ 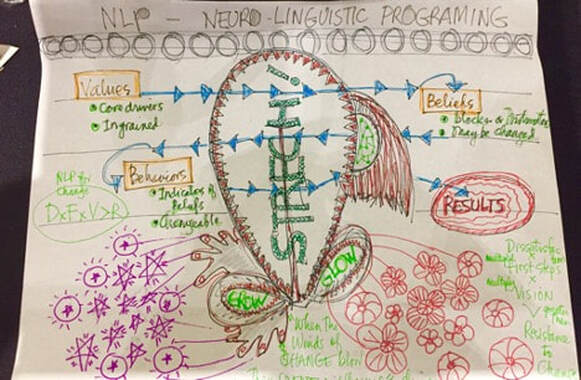 ​Fernando Sena, a fine arts student and scholar of CMLI then and now a sought-after artist and teacher, offered a summer art class when I was seventeen.  Since it was free for us members of the Children’s Museum and Library, Inc., I eagerly joined and enjoyed a more formal approach to art. I remembered sketching the image of Christ facing left, when it was actually facing right. I am wondering now whether I see the opposite side to things. As they say, Art is an interpretation of what one sees and we choose what we want to see, if only to make us survive the harshness of reality and eventually thrive in this world.

I did watercolor paintings when I found myself on hiatus and took this as a chance to immerse myself in my late 30’s with the same art teacher . I didn’t know that this medium was so challenging and frustrating. Although it could be so fluid and fast to finish, one must have a basic structure and preparation before application, and most of all, be tenacious and courageous enough to undergo disappointments along the way. Never one to waste materials, some of my “disappointments” I mixed with another medium to transform them into pieces I never expected I could be happy with. 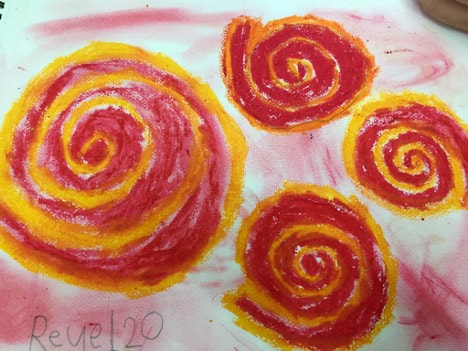 Reuel's Artwork
You see, Reuel was having frequent meltdowns, inflicting pain on himself and family members whenever he is agitated by thwarted intentions and circumstances he cannot control or cannot have a say in because he lacks expressive language. This was exacerbated by not being able to go to his training center, not walking at nearby academic oval in UP with his Tito Nene and having no functional academics with his homeschool teacher.

Having a structured life is so important for persons with infantile autism like Reuel who need constant supervision. For him, not knowing what to expect and what to do next is like inviting a major volcanic eruption. Any small thing like putting in the wrong color or not playing the right notes on the piano can trigger a massive meltdown.

​I was desperate to fill his schedule, not just with fixing his room or peeling garlic and chopping veggies in the kitchen, but also with fun activities like learning to bring to life images and colors on paper on his own. It is also crucial for him to socialize with friends even if just online to say “hello” and “goodbye”.
​I discovered that this journey through art is strewn with challenges on how to get Reuel to participate. At first, he was excited and curious about the online art program and was open to trying new things with me. Then as the days wore on, he would refuse to draw, leaving me to lightly pencil-in the figures.  And only then would trace them with a pentel pen and fill them in with oil pastel until finally, smudge chalk pastel for background color.

There were days when he would be missing out on the sessions because of oversleeping or he would rather just not join in. A lot of times he would rather finish one whole coloring book of mandalas than attend the sessions. We would have a lot of unfinished work and it would take us several days to submit even one. At other times, he would draw some of the figures and this is when we would happily collaborate and post our finished artwork for others to comment on.
​
​And during those times, when Reuel is smiling and concentrating, whispering some sort of ‘mantra’ under his breath, is when I feel that everything is well with the world; I would imagine the art muse hovering, gracing us with her quiet and reassuring presence.

It seems like Reuel is teaching me more than I am co-teaching him in this online program.  I learned that by keeping quiet as he worked on his colors, I was able to “read” his facial expressions and tune-into his non-verbal cues more intensely, such that I could anticipate his needs more and could, at times, potentially dissipate a meltdown.   I also learned to be more other-centered and less self-centered; to gently guide him and celebrate his little wins in gaining control of more complicated media like watercolor and acrylic.  Most of all, I was able to connect with him in a meaningful way.

I was able to process a very sad time and helped him get over his Training Center’s closing down through art journaling.  When I told him about it,  he quietly shed a few tears.  I thought of drawing the facade of the Being Home and showed it to him, hoping he would trace it with pentel pen and finished off coloring the teachers’ faces waving their goodbyes.  When it was done,  he agreed to have his picture taken with his smiling eyes still swollen.

​Because of Reuel and his friends’ differently-wired brains, they have created a refreshing view of the world through art. It is unadulterated and childlike, unschooled and authentic, pure and innocent. So much so that they have elicited much interest in their art.  Many groups have mounted their online Art Exhibit and Forum called Art and Disability 20/20.

​These children’s artworks were presented by teacher Amos who got sponsorship from many institutions here and abroad.  They partnered with Aesthletic, an online clothing company in Singapore to use selected works for a T-shirt line.  University of Brighton School of the Arts Deputy Head Alice Fox, founder of the pioneering MA Inclusive Arts Practice, is also keen on assisting our Art and Disability Initiative to get funding for visual arts and performances like the Arts Council England-funded learning disabled Rocket Artists.

And soon, these Gentle Giants, as they are called, will be coming out with mugs, all-occasion gift wrapping paper and the like, for capacity building programs and therapeutic interventions  with Boundless Possibilities Foundation, which was set-up by us parents to help our children lead happy and fulfilled lives, long after we are gone.